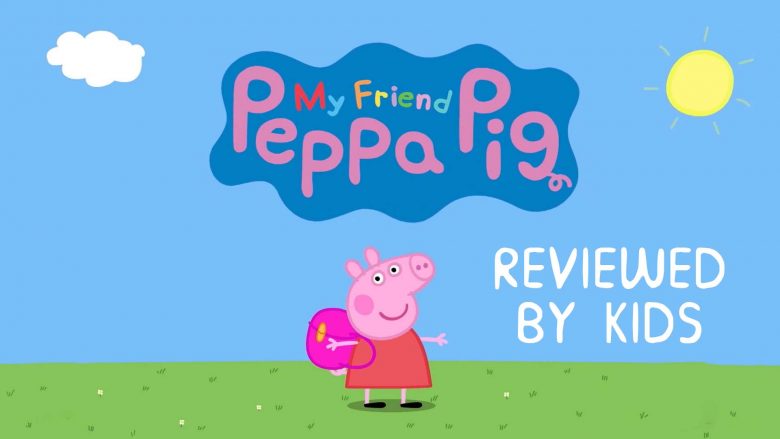 Since I’m almost 34 years old at the time of writing, I figured I’m probably not the target audience for this game. So I called in a team of experts (= my kids) and asked them their opinions about the game instead. My son Lio (3yo) and daughter Fé (6yo) will be sharing their firsthand experiences with the game in this family-review.

My daughter, Fé, has already joined me on a few reviews before (New Super Lucky’s Tale, Disneyland Adventures, Rush: A Disney Pixar Adventure) and for Lio it’s only his second rodeo after already chipping in his thoughts on Paw Patrol Mighty Pups Save Adventure Bay.

The game hadn’t even started though and both of them were already a big fan of the Outright Games logo, which drew their attention with an animation that looks and sounds like a ball pit. A nice touch that shows their focus on kid-friendly games and IPs.

So kids, how excited are you to review another game?
Fé: Pretty excited, dad! Let’s start!
Lio: I want controller. Not Fé. Not Fé.
Me: Alright, we’re starting off with sibling rivalry… nice.

This time we’re playing “My Friend Peppa Pig”. Do you like the TV show?
Fé: Yes. I love it! I’ve watched the episodes many times.
Lio: Yes! They jump in puddles and it’s funny!
Me: Yeah, jumping in puddles is fun. Unless you’re the parent who has to do the laundry…

I set the game to use the Dutch voices and text. Do you recognise them from the show?
Fé: Yes! It really sounds like Peppa and her friends and family! I missed the voices in the Paw Patrol game…
Lio: Sounds like Peppa. And her daddy’s funny! But he not oink so loud like on TV.
Fé: That’s true. I didn’t notice, but they don’t oink as much as in the episodes.

At the start of the game, you could create your own character. Did you like that?
Lio: Fé picked a white rabbit.
Fé: Yes! I like it very much! Though it was hard to pick between a cute girl rabbit or a sheep.

And is it easy to control your character?
Fé: It’s very easy. You only have to walk left or right and press A.
Lio: And if you press the green button, you can also jump! In puddles! You can jump in muddy puddles!
Me: when not in front of an item or person to interact with, the A button does make your character jump, but it’s never needed. There is no hand-eye coordination required and kids can play it at their own pace.

But is it easy to know what to do?
Fé: At first I knew exactly what I wanted to do. But then I didn’t find anything new and I kept doing the same things over and over again.
Lio: I don’t mind doing it again and again. It’s fun.
Me: There is indeed not a lot of guidance to bring you towards the things you haven’t seen yet, other than interacting with the TV and Peppa’s parents at her home.
Fé: And if you talk to someone that you’ve already talked to. You have to wait REALLY long and if you then press A again by accident, you have to listen to them AGAIN.
Me: Welcome to my experience playing JRPGs growing up, kid!

So there is a lot of repetition?
Fé: Not if you know exactly where to go. But I didn’t.
Lio: She didn’t.
Fé: And every time you drive to the grandma and grandpa’s house or back, it shows the same scene with the people working on the road.
Me: That was indeed really annoying.

And what about the sound? You already said you liked the voices.
Fé: I recognised a lot of songs and music from the TV show as well.
Lio: Yeah. Me too.
Fé: But I did notice some repeated sounds.
Me: Like what?
Fé: Like laughing. Or Polly’s bird sounds. They repeated a lot and I didn’t like the sound of that. Oh, and sometimes it sounded like they didn’t finish a sentence before the next one starte…
Lio: I’m hungry!
Me: Yep. Kind of like how kids don’t let you finish your sent…
Lio: Sandwiches !?
Me: Sentences. Sigh…

I noticed the entire game is subtitled as well, that’s nice.
Fé: I can’t read that fast yet. I only learned about – *Counts* – 15 letters so far at school.
Lio: I can read.
Me: Yes, your own name and Fe’s, but that’s about it. But to clarify: the entire game is subtitled and voices in a lot of different languages and with the original voice actors, at least in Dutch and English. That’s amazing!

Did you like the length of the game?
Fé: It was perfect. It feels like playing one TV episode after another and we usually only watch one or two.
Lio: It was very long. I like it.
Me: and this is why it’s important I still weigh in here as well. It takes about 1 hour and 15 minutes, which isn’t very long for a game that costs $40.
Fé: But we don’t have to pay. We are kids.
Lio: I have chocolate coins.

Once you’ve “beaten” the game. Is there anything else to do?
Fé: No. It’s the same things over and over again. Though there were some things I forgot, like making a different drawing at the school.
Lio: It’s fun. I could play it again and again.
Me: and this is why it’s important to ask the kids. We notice the short length of the game, but the kids don’t mind repetition as much. Especially the young ones as that is how they learn. If you use the typical “how much does it cost versus how long will I play”, My Friend Peppa Pig doesn’t seem like a good deal. But the kids have a different perspective.

How long to beat and complete?

It takes around 1 hour and 15 minutes to do everything there is to do in the game if you know where you need to be going. I expect kids without guidance to take around 3 hours to see the “ending”. But it’s not linear at all and they can tackle the point & click challenges at a leisurely pace.

If you’re playing this for the achievements (I won’t judge!). It should take around 1 hour to get the full 1000G.

My Friend Peppa Pig is a great game if your kids are a fan of the show and it stays true to the formula. It has simple and highly accessible controls for even the youngest players and could easily be mistaken for an episode of the TV show for onlookers.

*Disclaimer: Reviewed on Xbox Series X. Review copy provided by Outright Games.
NOTE: the score is given with the actual target audience in mind.

Do you prefer to see it in action? Here is the first half of the game, but it’s in Dutch, mind you: 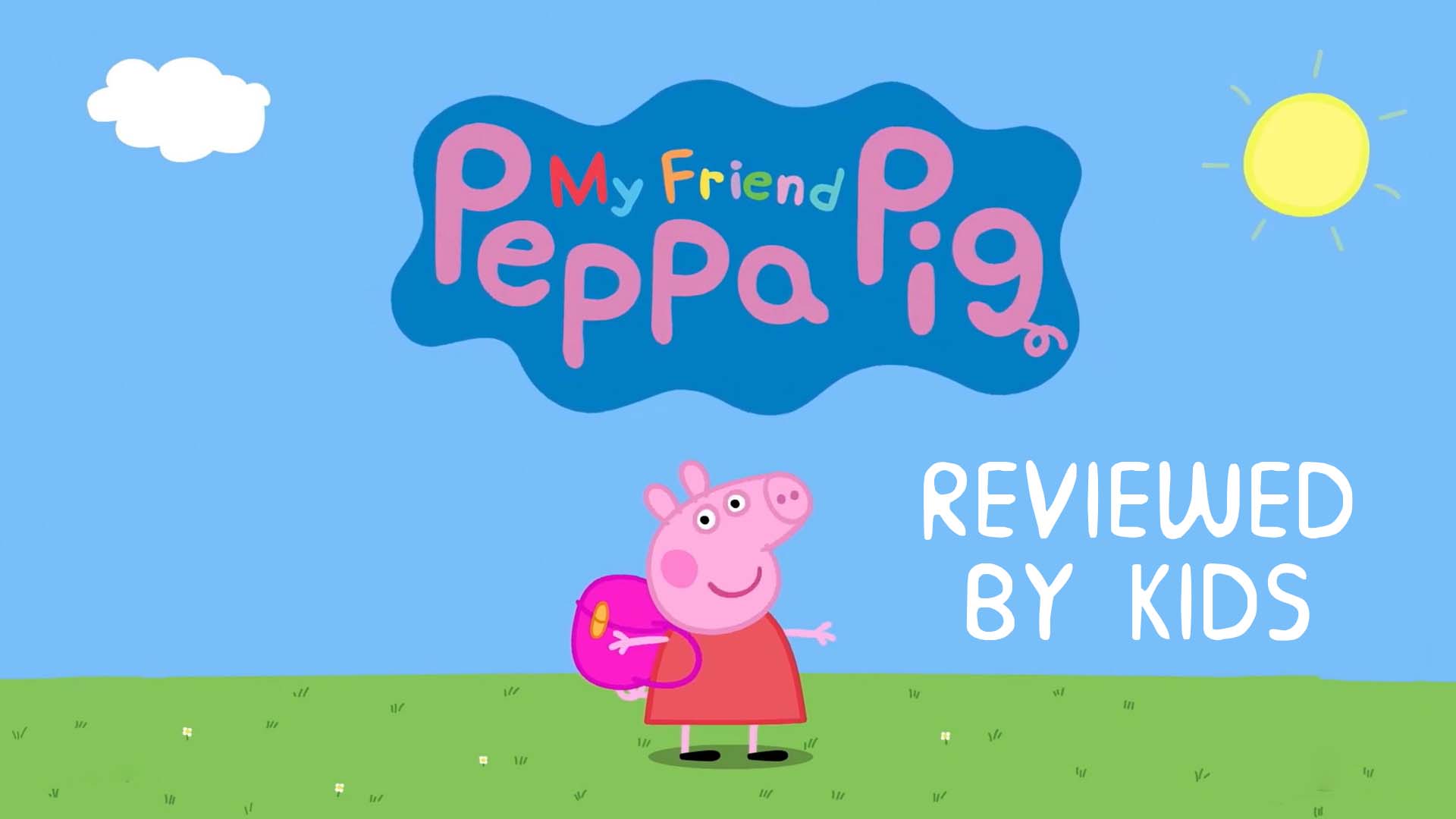 True to the source material