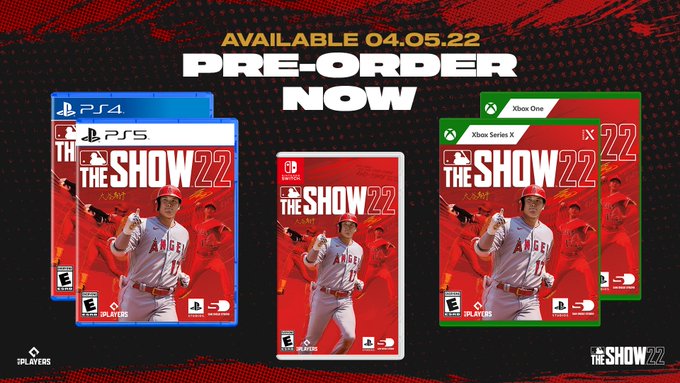 The next iteration of the yearly baseball release will be hitting PlayStation 5, PlayStation 4, Xbox Series, Xbox One, and for the first time Nintendo Switch on April 5.

Pre-orders are live now with the standard edition being priced at $69.99 on PlayStation 5 and Xbox Series and $59.99 on PlayStation 4, Xbox One, and Nintendo Switch. The game will also once again be available day 1 on Xbox Game Pass.

You can read more about the game, cover athlete, and more below.

Shohei Ohtani’s 2021 season was one for the ages. Hitting 46 home runs, 100 RBIs, and stealing 26 bases while also having a 9-2 record on the mound with a 3.18 ERA and 156 strikeouts. It has been said, “The man on top of the mountain didn’t fall there.” Ohtani might seem like an overnight success here in the United States, but he’s been climbing the impossible mountain since his teenage years attending Hanamaki Higashi High School in Japan.

After having one of the greatest seasons in the history of Major League Baseball, Shohei Ohtani was really the only obvious choice to grace the cover of MLB The Show 22.

For the second year in a row, MLB The Show is expanding to a new platform and will give fans a new way to play! MLB The Show 22 will be available on Nintendo Switch for the first time, adding to the console lineup on PlayStation 5, PlayStation 4, Xbox One, and Xbox Series X|S. This is a very exciting moment for all of us, as the storied franchise continues to welcome more players. We would like to thank everyone at Sony Interactive Entertainment, Xbox, Nintendo Co. Ltd, Major League Baseball, Major League Baseball Players Association, and the San Diego Studio for making this happen.

Cross-Platform Play, Cross Saves, and Cross Progression Expands to include Nintendo Switch for MLB The Show 22

Nintendo fans can now join in with Xbox and PlayStation fans to play against each other online with cross-platform play in MLB The Show 22. In addition, cross progression allows you to earn and use any earned content on any platform or generation (this excludes PlayStation 5 and Xbox Series X|S-exclusive features like Stadium Creator). With cross saves you can transfer a save file for Road to the Show or Franchise mode to a different console.

With MLB The Show 22, you now can easily move from platform to platform and keep access to your entire inventory of cards, and the MLB The Show Account allows you to do so. Just create your MLB The Show Account on TheShow.com and link your PlayStation, Xbox, and / or Switch and you are all set. While you are creating your new linked account, make sure you sign-up for The Scouting Report, so we can send you all the latest MLB The Show 22 information and subscribers also get an exclusive pack each month starting in April.