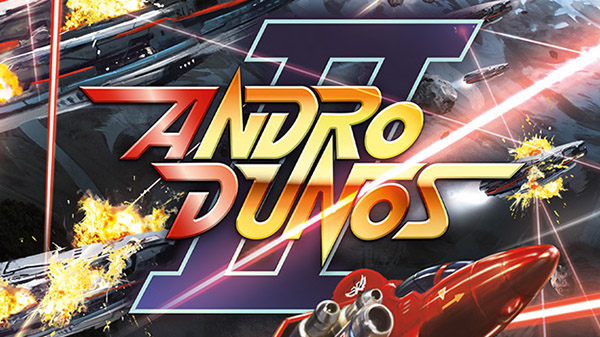 If you’re a fan of shoot’em ups then you may be interested to hear that Andro Dunos II from Picorinne Soft and Just for Games is out today on PlayStation 4, Nintendo Switch, and PC with an Xbox One version coming soon.

The game is available digitally for $17.99 while a physical boxed version is also available in Europe on Nintendo Switch and Nintendo 3DS. A boxed version will also be coming on PlayStation 4 and Dreamcast but they are postponed for now.

A limited edition will also be available on Switch and PlayStation 4 that will have a alternate cover, a certificate of authenticity, a numbered sticker, and another mysterious bonus that will be revealed soon. You can watch the trailer and learn more about the game below.

In this pure homage to the classic 90’s Arcade shoot em up you take control of one of the most technologically advanced space ships ever made with 4 weapon sets which can be changed depending on what situation you are in between them taking out enemies from all angles.

Weapons can be upgraded by collecting pickups or in the end level upgrade screen up to a maximum of 7. You also can take advantage of Missile and Shield pickups which can also be powered up to level 7.

Each weapon builds up a charge when firing which unlocks the Hyper Shot which delivers a devastating blast to whatever gets in its way…but be warned it also leaves your weapon weak and your ship vulnerable until charged back up again,

Starting on earth battle your way through 7 stages powering your weapons up until you reach the edge of the galaxy and the secret base from where all enemy waves are being orchestrated from. You will need to use everything you have learned on the journey about your weapon sets to take out the final boss and restore peace to Earth once more.