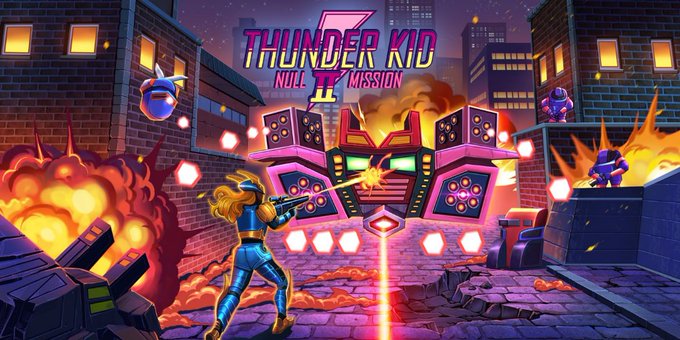 It’s time for some more low-poly 3D run ‘n’ gun action as publisher Eastasiasoft and developer Renegade Sector Games are back with Thunder Kid II: Null Mission. The game released on PC some time ago but with it now making the jump to consoles I checked this sequel out to see what it was all about.

If you played the first Thunder Kid game on consoles that released back in March then you’ll be able to jump right into this sequel as it feels very much the same. The story takes place in Millenium City where the evil Robot Empire has returned and is kidnapping people. You have to control Thunder Kid once again, rescue the humans, and put a stop to the Robot Empire. You’ll once again be controlling the character from behind while jumping and firing your way through various levels set in the city, swamps, deserts, and more. The game is very easy to control with movement tied to the left stick, firing to R1 or R2, and jumping to the X button.

There really isn’t much to the game as each level will just have you running and jumping while shooting at the enemy robots while trying to dodge their attacks. Boss battles occur every so often and are a bit more challenging but overall the game is pretty easy to get through and shouldn’t really challenge anyone. There are some collectible coins to find but they only seem to be relevant in terms of unlocking the game’s trophies. While playing through it I found the low-poly art style to be fun to look at and the synth soundtrack was enjoyable. If you’re a trophy hunter you’ll find 15 trophies to earn including a Platinum and since it’s cross-buy you can earn two of them. It’s another fast completion here as you can earn then all in probably an hour or less.

Thunder Kid II: Null Mission is exactly more of the same from the first game for better or for worse. It will provide you with some brief running and gunning fun through some low poly environments but outside of that  it doesn’t have much to offer.