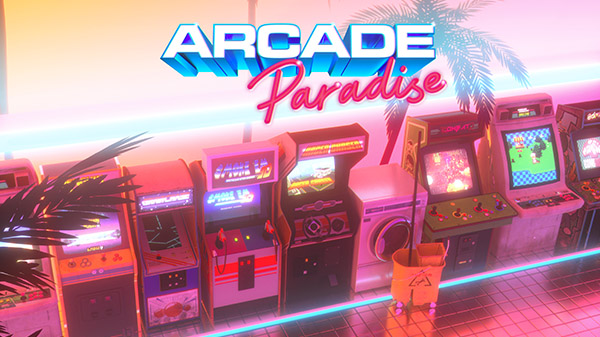 The thought of playing a game where you run a laundromat doesn’t sound very exciting does it? What about a game where you run a laundromat AND use the money you make to build out a video game arcade? That’s exactly what you’ll be doing in Arcade Paradise from publisher Wired Productions and developer Nosebleed Interactive. This one has been on my radar for quite some time now and I’ve got the verdict on how the PlayStation 5 version turned out.

Arcade Paradise is a simulation/management game where you play as a teenager whose father wants them to fun the family laundromat business. You discover some old arcade machines in a back room and figure that if you use the money you make from the laundromat to build out an arcade you can come out even better. Your dad isn’t big into video games and thinks they are a waste of time but you see there is money to be made in it and set out to do just that whether he likes it or not. Like most of us in our everyday lives in order to get to the fun stuff we have to put up with some menial tasks first. Running the laundry business means you’ll be cleaning up trash, scooping up gum, taking care of the bathroom, and of course loading and unloading the laundry machines. All of these tasks are done through little mini-games that surprisingly are quite enjoyable. Once you start making some money from all of this you can start putting it towards that dream arcade.

You start off your arcade room with just a few machines but as you make more money you can spend it on building out your floor space, buying more machines with over 30 in total, and in turn make even more money. How much you make is dictated by a variety of factors like how much you set the price at for someone to play one time or how hard the game is. Some arcade cabinets may be more popular than others so you may want to take a less popular game and move it next to one that gets a lot of traffic to increase the chance that people will spend money on the less popular one. What’s even cooler is that you can play all of these games yourself when you have time and many of them are quite good like the Outrun clone Spacerace or a Pac-Man clone where you eat dollars instead of pellets. You can even play some of them in up to four-player local co-op which was a surprise.

You also have an office which has a lot of 90’s references and this is where you can buy the upgrades for your arcade. Those are done by going onto a site via your computer but you can also unlock art, music, and other things here too. That pretty much sums up the gameplay as you’ll progress through the story balancing running both businesses and playing the games yourself if you feel like it. It can get a little repetitive at times but as someone who grew up in the 90’s this game’s vibe really spoke to me. The visuals in the game look pretty nice with a lot of metallic surfaces about and the arcade games look as you would expect them to. The soundtrack has some nice techno, synthwave, and electronic music that seems like it would fit the era so there’s that. Trophy hunters will find a huge 55 trophy list here including a Platinum. It’s a robust list that will ask you to do a lot of different objectives in the various arcade games and such.

Arcade Paradise is an awesome management sim that shows a lot of love to the era of arcades. I really enjoyed balancing running both businesses and trying out all the different arcade games even if it got a bit repetitive at times. It’s got a lot to do, a great look, and some really good tunes and it’s highly recommended by me to check it out.