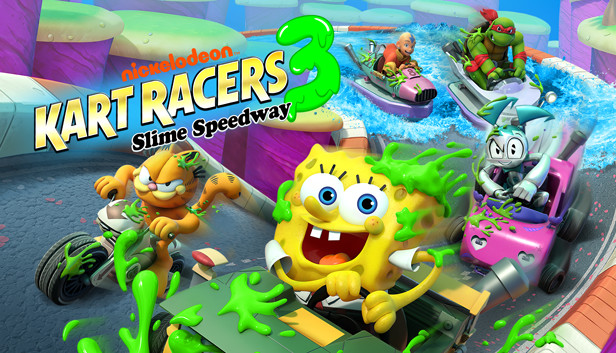 If you’re a fan of kart racers a new one has just arrived on the starting line and it probably has characters that you are quite familiar with. Nickelodeon Kart Racers 3: Slime Speedway from GameMill Entertainment and Bamtang Games is out now across most major platforms and aims to bring improvements to this ongoing series. Here is my review of the PlayStation 5 version.

With this being the third entry, you can be assured that there is a ton of content here to sink your teeth into. The game features 36 tracks and over 40 different characters to play as so if you have a Nickelodeon favorite there is a good chance they are here. I won’t name them all but you got Garfield and Odie from Garfield, CatDog from CatDog, the Ninja Turtles and April from TMNT, Jimmy and Cindy from Jimmy Neutron, Zim and GIR from Invader Zim, as well as characters from SpongeBob, Hey Arnold, Avatar: The Last Airbender and many more. Sure, there are always characters that you wish made the cut but I was quite pleased with the huge playable cast that made it in.

Playing the game should be easy for all ages but the game isn’t so easy as to bore an older and more skilled player like myself. You got your standard controls like steering, accelerating, and braking, but you can also perform tricks when going off jumps and perform power slides. With this being Slime Speedway slime plays an important role in the gameplay. Anytime you travel on slime along the track you’ll gain speed and you can also travel on new paths that are coated with it. Slime coins can also be picked up to gain a speed boost similar to how games like Mario Kart or Crash Team Racing give more speed the more coins or fruit you have. These slime coins are also gained from completing races and challenges and are used to unlock pretty much all the locked content in the game including characters, vehicles, parts, and more.

Car parts all have stats of their own so you can go about choosing ones that fit the type of playstyle you prefer. The game also has 90 crew members to choose from each of which gives you additional bonus perks while racing. Any race you go into lets you pick two support crew members and then a primary support unit that gives you a special attack when you charge it up by driving on slime. No matter what character, car, or parts you choose there is a good number of modes to choose from including various cups, arena mode, challenge mode, time trials, and local and online races. Online isn’t as populated as Mario Kart but I had little to no problems finding a match and it performed well during them.

The visuals and performance on the PlayStation 5 version of the game were solid and there is a lot of variety with there being 36 tracks in the game that are all from the various properties. Another improvement that this game has over the last entry is character voice acting which was very needed to help make the game feel livelier while racing.

Nickelodeon Kart Racers 3: Slime Speedway brings some nice refinements to this ongoing series along with upping the amount of content across the entire package. It doesn’t play drastically different from the first two but you get more characters, modes, tracks, parts, and more than the last entry. I would fully recommend it to any fan of kart racers and especially to fans of these Nickelodeon properties.